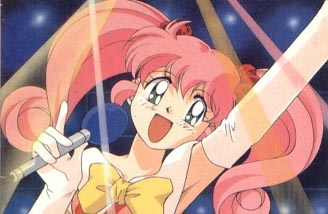 "My daddy and Nosaka-kun's father are WEIRD! Weird! EVERYONE is WEIRD! But I think I could get used to all these weird people. Hanya!"
Advertisement:

Chou Kuse ni Narisou (literally "I'll Make a Habit of It") is a shoujo manga written by An Yoshimura and drawn by Yayoi Nakano, which ran in Nakayoshi from 1993 to 1995. A 39-episode anime adaptation aired from 1994 to 1995.

Nagisa Shiratori is a girl who loves to sing. She leaves home, is promptly discovered, and instantly becomes the top Idol Singer in Japan. Her secret: she's really the heir to a martial arts dojo that's having trouble attracting any students to develop into possible heirs. She needs to find some strong people... but she's an Idol Singer, so she can't. So she disguises herself as a boy and enrolls in the toughest junior high school she can find.

Add the members of the school gang, an Unknown Rival trying to supplant her as the #1 Idol Singer, and an international conspiracy, and Hilarity Ensues in a very Ranma-ish way.