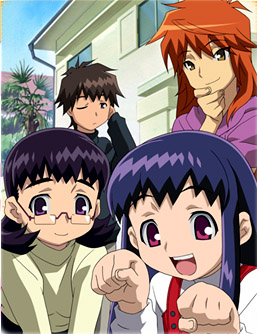 Haruma Kawagoe has had the lifelong wish of being an older brother. However, after a miscarriage and an operation

, his mother could not give him a little sister. Nevertheless, he never gave up on his wish.

One Christmas night, during his college days, Haruma has a huge present delivered through his window by a woman on an airborne motorcycle claiming to be Santa Claus. The present contains the little sister he always wanted, and Santa justifies the time it took to fulfill his wish by saying that making a little sister takes a lot more time than just making an android.

This cute manga and anime follows Haruma's life as he attempts to adjust to suddenly having a little sister out of the blue, especially a little sister who has an instruction manual with material inappropriate for her age, and follows it religiously.

Tropes this show has examples of: