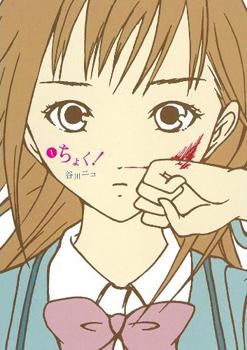 She forgot her bloody nose mask. It keeps her clothes from getting dirty.
"Do friends cover each other with blood from bloody noses?"
- Serika
Advertisement:

Nao is just a normal high school kid who's a tad shy and withheld. He doesn't have any friends but seems just fine with it. Enter Serika, a girl in his school looking for a friend. Also, she is the single strangest person he has ever met, constantly having nosebleeds whenever she looks at him and rarely showing an expression on her face besides absolutely serious. She's also decided that he's going to be her new best friend...

Choku! is the first manga by Nico Tanigawa and holds many similarities to their more popular series of No Matter How I Look at It, It's You Guys' Fault I'm Not Popular! However, instead of making comedy off of the social ineptitude of the main character, it instead forces said character to grow by introducing someone even more socially inept than him to an absurd degree.