Video Game / Out to Lunch! 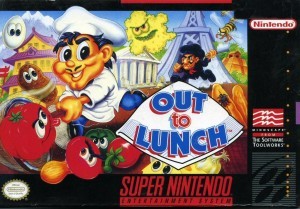 Out To Lunch is a video game developed and published by Mindscape for Super Nintendo Entertainment System, Game Boy and Amiga in 1993.

The game's a platformer in which you play as Pierre le Chef who has to collect food that escapes his fridge in six different countries:

Not to be confused with Eric Dolphy's final music album.