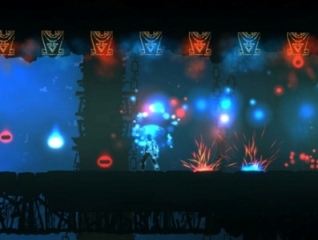 Ikaruga, eat your heart out.
Outland is an adventure platformer game, developed by Housemarque. It was published by Ubisoft for the Xbox Live Arcade and PlayStation 3 in 2011, and then published by Housemarque themselves on PC through Steam in 2014. It is known for combining Metroidvania, Bullet Hell and platforming, and is heavily influenced by Ikaruga.
Advertisement:

An unnamed man experiences bizarre dreams every night, and no medicine can rid him of them. Exhausted and compelled to find answers, he visits a shaman who tells him a tale of what is occurring. Thirty millennia ago, two divine sisters, one of light and one of shadow, created the world, and both of them wished to destroy it afterwards. A hero rose up and, using his own soul, bound them both to the earth. The main character is the reincarnation of that hero, and the fact that he's back means the sisters will rise again too. Therefore The End of the World as We Know It is at hand, and it's up to this new hero to rise up and begin Saving the World.

Outland plays much like a 2D Metroid game, with the player being capable of jumping and interacting fluidly with the environment, and fighting with a sword and various special abilities. Unique to the game is the Ikaruga-like colour switching mechanic: most game objects come in a blue or red colour, and the player eventually gains the ability to switch between the two colours as well. Matching the colour of an enemy makes both sides deal reduced damage to each other, and allows the player to absorb bullets, while contrasting it has the opposite effect; similarly, coloured objects are only solid to the player when the colour is matched. The game is not a Metroidvania in the strictest sense; although the world mostly remains open to be explored as the game progresses, each level is linear, with only small rewards for backtracking later on. Rather than exploration, the focus is on action, platforming and puzzles.