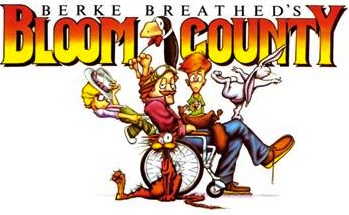 Bloom County is an American newspaper comic strip written and drawn by Berke Breathed, running from December 8, 1980 to August 6, 1989 and in a revived form since July 13, 2015.

Bloom County is a character-driven strip featuring a heavy dose of political commentary, and won the Pulitzer Prize for Editorial Cartooning in 1987, only the second strip to ever do so (the other being Doonesbury in 1975). It coincided almost exactly with the presidency of Ronald Reagan and represents a unique portrait of American politics and culture in the 1980s. The cast tended to shift over the years, but some of the main characters were:

Eventually Berke ended the strip because he was tired of it and segued into a new one, Outland, a Sunday-only strip whch ran from 1989 to 1995. Many of the regulars of Bloom County eventually leached back into that strip, as they later did again with Breathed's second Sunday-only strip Opus, which ran from 2003 to 2008.

Berke has also made books using the Bloom County characters, including A Wish for Wings That Work and Goodnight Opus for Opus, as well as The Last Basselope for Rosebud.

In 2009, IDW Publishing launched Bloom County: The Complete Library, a hardcover collection of the entire comic in five volumes with annotations explaining outdated pop-culture and political gags and occasional insight from Breathed. Two volumes collecting the entirety of the sequel series Outland and Opus followed soon after, with similar annotations.

In 2015, in anticipation of the 2016 presidential race, Breathed revived the strip as Bloom County 2015. Instead of following the publishing schedule and editorial guidelines of a syndicated comic, he is using his Facebook page

to publish the strip online.

In 2022, an animated series was reported

to be in development for Fox, with Breathed serving as executive producer and co-writer.

Tropes found in Outland and/or Opus: