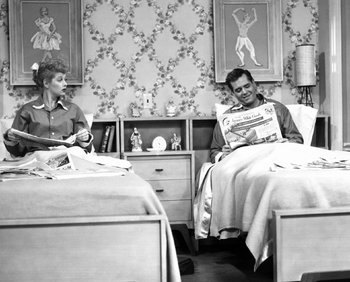 "Great news, honey! Our nightstand is expecting!"
"I don't mind telling you, we pushed our beds together that night! And that was no mean feat; her room, as you know, is across the hall."
— Niles Crane, Frasier
Advertisement:

Once upon a time, back in The '30s and The '40s, The Hays Code foisted very harsh censorship rules upon American filmmakers by the Moral Guardians. (The Hays Office was actually created by the studios themselves, in part, because they feared that actual government censorship would be the result of failing to rein things in.) One of the "do nots" that weren't to be shown in films under any circumstances was "Any licentious or suggestive nudity." Further down, in what was described as the "be careful" section, was "Man and woman in bed together."

The result was this trope: couples of any type were never shown in the same bed together, even if the work in question featured them as married and having children. If couples were shown in a bedroom at all, they were consigned to a pair of twin beds, usually with a nightstand in between so you didn't imagine them ever pushing the beds together when we weren't watching. Exactly where all those onscreen kids came from was not a question you were supposed to ask. In less censored media from the same era, twin beds were generally used to imply Sexless Marriages, and couples whose marriages were not believed to be lawful might find their sleeping accommodations unhappily altered.

A curious variation appeared where the couple in question was actually shown as owning a bed big enough for two people. In such cases, they would never be lying down in the bed on-screen at the same time. The most "risqué" thing usually seen on-screen was one of them lying down and the other sitting on the edge of the bed. It can be gleaned from this that, in the eyes of the censors at the time, the unwritten rule was apparently that the line between a perfectly innocent talk in the bedroom and a prelude to steamy sexual activity was whether or not someone kept at least one foot off the bed and firmly on the ground at all times.

Although (as noted above) it wasn't strictly forbidden to show men and women in bed together, it almost never happened in practice after 1934. This trope carried over to television in the 1950s and remained in effect until censorship standards loosened and The Hays Code became a dead letter in the 1960s, replaced by the MPAA ratings system for films and FCC censorship for television. The first live-action TV couple to share a bed on television, who were not already married in real life, were Darrin and Samantha Stephens on Bewitched. By the early '70s, the trope had been discarded entirely on such series as The Brady Bunch and The Bob Newhart Show.

While mostly a Dead Horse Trope now, it might crop up from time to time in parody. It might also be used as a shorthand indicator that a married couple's relationship is in trouble. Nowadays, if a couple is depicted as doing this, it represents that they have a very distant or antagonistic relationship. Or they may have other reasons for not sharing a bed like incompatible sleep, though having a different room is just as common for this. A reversal of this trope occurs when the characters aren't in a romantic relationship but There Is Only One Bed. Not related to Exiled to the Couch.