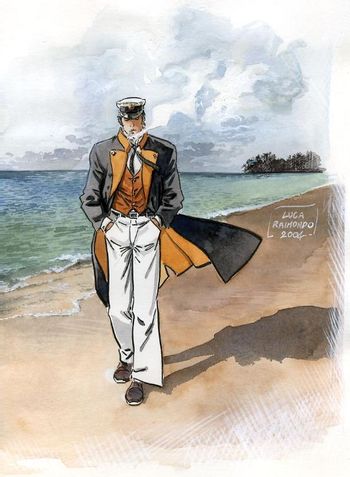 "When I want to relax, I read essays by Engels. When I want something more serious, I read Corto Maltese."
— Umberto Eco
Advertisement:

Corto Maltese is a graphic novel series created by Hugo Pratt in 1967, and one of the most famous examples of the French-Belgian comics school at its best (even though the author was actually Italian). The best-known adventure, Una Ballata Del Mare Salato (The Ballad of the Salt Sea) made Le Monde's "100 Books of the Century" list.

The title character is a fictional adventurer active during the years before, during and after WW1. Born of a sailor from Cornwall and a fortune-teller from Gibraltar, Corto Maltese has a lifelong case of wanderlust and travels across the world as a gentleman of fortune, treasure seeker and occasional pirate. His recurring sidekick is a psychopathic Russian named Rasputin (who coincidentally does look like the historical Rasputin).

An Animated Adaptation was released in 2002, Corto Maltese et la Cour Secrète des Arcanes, and Canal+ adapted six of the shorter stories into the 30-minute episode format too.

In 2015, new Corto Maltese adventures by Blacksad author Juan Diaz Canales and artist Ruben Pellejero began, beginning with Under The Midnight Sun. It was followed by Equatoria, a celebration of the series' fiftieth anniversary, and Tarowean's Day, which finally told the story of how Corto came to be tied to that raft in his very first appearance, all the way back in 1967. 2021 saw the release of The Black Sea, a modern reboot

The series can be purchased in the Anglosphere via IDW Publishing, who are reprinting the entire series in oversized black-and-white collections.

In 2015, the series was continued by Ruben Pellejero and Juan Díaz Canales, and currently comprises the following albums.