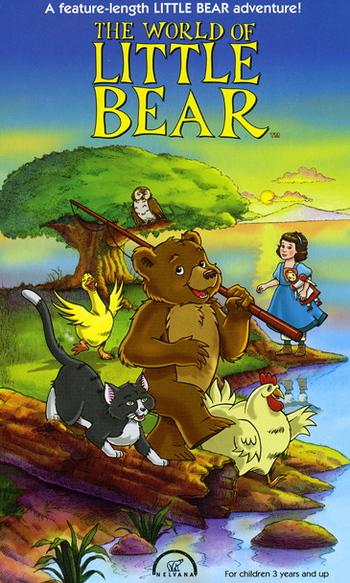 In 1995, Little Bear received a 65-Episode Cartoon Animated Adaptation created by the world-famous Canadian animation studio Nelvana. The show, much like the books, follows the stories of a... well, little bear, his parents, and his friends Hen, Owl, Cat, Duck, and a young girl named Emily (with a monkey named Mitzi joining them in later seasons). As expected from a cartoon aimed at preschoolers, the show follows the simple everyday adventures Little Bear has with his friends and family both at home and in the woods surrounding them, learning lessons and exploring the world. Elsie Minarik and Maurice Sendak were both involved in the show's production process.

The show aired on CBC (and later Treehouse TV) in its home country, but is also remembered for airing on Nick Jr. in the Unitedt States (with the show now being available on the Noggin app). You can also catch every episode on Youtube through the show's official channel

The series is also available through Paramount+.

In Christmas of 2000, a film based on the animated series was released in theaters, and later to video in 2001. Simple titled The Little Bear Movie, it too was created by Nelvana. The plot revolves around Little Bear meeting a mysterious bear around his age named Cub, and trying to reunite him with his parents upon learning that they had been separated.

Little Bear - Under the covers

Little Bear and his parents have some fun with one another when the tyke tries to help them get rid of some "bed bugs".

Little Bear - Under the covers

Little Bear and his parents have some fun with one another when the tyke tries to help them get rid of some "bed bugs".