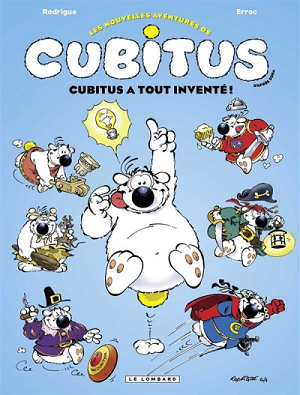 Cubitus (Dommel in Dutch, Wowser in English) is a Belgian comic books series, created by Dupa (1945-2000) in 1968. It's a surreal gag comic strip about a huge white and obese dog and his frequent run-ins with his Absent-Minded Professor boss Sémaphore ("Semafoor" in Dutch, "Professor Dingy" in English) and cat neighbour, Sénéchal ("Balthasar" in Dutch, "Ratso Catso" in English).

The series debuted in the magazine "Tintin" near the end of the 1960s and quickly became one of their most popular features. Most episodes were gag comics consisting of one page. Some were much longer stories. Frequent running gags had Sémaphore trying to make Cubitus behave more like a normal dog or get into the bath tub for a wash. The dog also tried to steal food on the sly, sometimes succeeding, often failing. The most frequent situation had Cubitus and Sénéchal trying to insult, fight or fool each other. As the series went on the gags often bordered to the surreal, with many big lipped alligator moments.

In the 1980s the comic strip series was adapted into in an anime series called Wowser. This increased the comic strip's notability and popularity and even inspired a short-lived magazine. The Animated Adaptation added two extra characters who didn't appear in the comic strip at all, Beatrice — an old woman with glasses- and Linda Lovely — an attractive young blonde. Compared to the original however, the cartoon series was pretty much straightforward kids' entertainment, while the comic strip has a very peculiar eccentric and often surreal style that most younger kids wouldn't really understand at times.