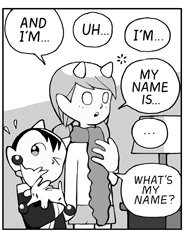 Once a farm girl, then a feral devil girl, and now an innocent dangerous only on occasion
Nina: You got it wrong. My name is not Anna, I'm Nina.
Dr. Tenma: For now, but that wasn't your name back when you were brought into my hospital.
— Monster

Amnesia comes easy in fiction. It is also conveniently specific. A taste of Applied Phlebotinum, a particularly shocking traumatic event, or even a simple Tap on the Head will be sufficient to make your character forget all about who or what they are.

In most cases, the character has simply lost their memories, no longer remembering their name, loved ones or where they came from. This is often the cause for a Quest for Identity.

Sometimes, however, it is their personality that has changed. Not only do they not remember who they were, they are convinced that they are someone else entirely. In essence, Bob doesn't just forget that he's Bob, but he thinks he's Alice instead...

The affected character may have additional amnesia on top of their personality change, but it's not a guarantee. It's possible they may still know everything they did prior to the switch, except that they've never before acted the way they're acting now. Attempts to get them to remember previous life-defining events that may snap them out of it are likely to be met with a stern dismissal: "Why do you keep talking about this "Bob" guy?! I haven't time for this! I'm a world-famous opera singer and must be on stage in one hour!"

Just like other forms of TV amnesia, this variety is often rectified by just smacking the character in the head a second time; they are usually very resistant to seeking out help on their own. As far as they're concerned, nothing is wrong.

Once restored, they'll probably have no recollection of their amnesia-induced alter ego, and will probably be puzzled as to why time has moved forward by several hours/days.

Once their Jekyll & Hyde nature has been demonstrated, it's a foregone conclusion that should the character in question get tapped on the head at a later date, the alternate persona will be right back in the saddle again.

A vast exaggeration of a Truth in Television mental disorder, known as a "Fugue State". This is when someone believes themselves to be someone completely different. They may move to a different town and assume a different identity, without being aware the new identity is false. It is a very, very rare result of a psychotic break. Dissociative amnesia can also parallel this trope, but also under very rare and extreme circumstances.

Clinical identity amnesia is the inability to identify with things you have done or said. You still remember who you are, but have no memory of having done certain things. You're just as likely (or more) to disown good deeds as bad ones.

See also Brainwashed, Easy Amnesia, Fake Memories, We Want Our Jerk Back, Wistful Amnesia, Amnesiac Hero, and Amnesiac Lover. Not to be confused with I Am Who?

Whatever Happened to SpongeBob

After getting bonked on the head, SpongeBob forgets everything about his life, even his own name. After visiting some passers by, he assumes the identity of "CheeseHead BrownPants".

Whatever Happened to SpongeBob

After getting bonked on the head, SpongeBob forgets everything about his life, even his own name. After visiting some passers by, he assumes the identity of "CheeseHead BrownPants".