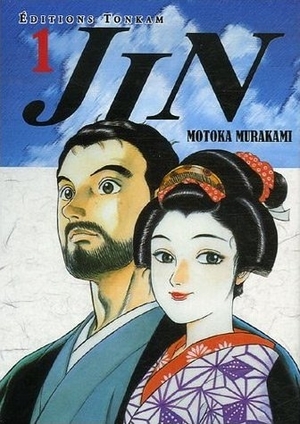 Jin (仁) is a manga by Motoka Murakami, which was serialized in Super Jump from 2000 to 2010 and compiled into 20 volumes.

Minakata Jin is a brilliant brain surgeon in contemporary Tokyo. One day, after operating on a patient with a freak brain tumor, he starts hearing strange voices, and all of a sudden he finds himself transported 140 years into the past. One minute he was in the hospital he works at, the next he's in a grove, while men are having a swordfight mere meters away. He soon figures out he is stranded at the end of the Tokugawa era, a few years before the beginning of the Meiji era.

Before long he casts aside philosophical questions about changing the course of history and whatnot; with a cholera epidemic in full swing, he applies his medical knowledge and fast-forwards the development of germ theory by several decades. As he becomes increasingly famous, he attracts the attention of various political factions and eventually takes sides.

A Live Action TV show called JIN has been made of it in 2009. A South Korean version was broadcasted and adapted, known as Dr. Jin.

On June 16, 2017 Murakami Motoka started a Patreon account to allow an "official" English translation to be posted there. No word on publishing a localization.