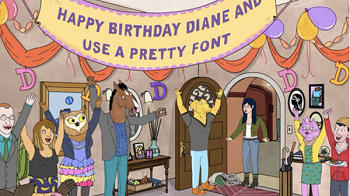 Mister Peanutbutter hires a very Literal-Minded sign maker and put the image and caption on the right.
Advertisement:

Describe topic here. And I mean in that spot. Ctrl + A, Backspace, THEN describe it. That's just the default message, you're supposed to replace it -- are you getting all this?

In fiction, one character will dictate something to be written to another. However, something silly might happen, making the first say something not meant to be written, which the second will obliviously write.

The inverse of Reading the Stage Directions Out Loud.