Anime / Iroduku: The World in Colors 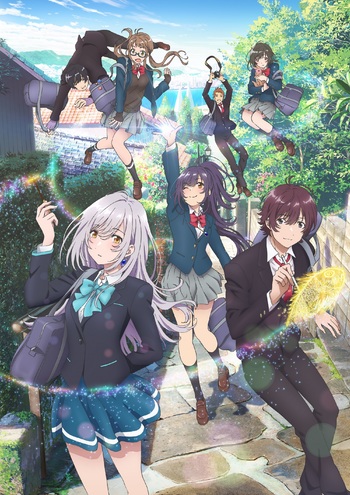 This world is full of so many colours. I wonder what colour I am? note Clockwise from bottom-left: Hitomi Tsukishiro, Chigusa Fukasawa, Kurumi Kawai, Sho Yamabuki, Asagi Kazeno, Yuito Aoi, Kohaku Tsukishiro
"I wonder when it started. When did I stop enjoying fireworks? The fireworks I saw with my mother, red, blue, yellow, green, orange, they were all so beautiful. I got older. People important to me went far away, and before I knew it, the world had... lost it's color."
— Hitomi Tsukishiro, the opening line of the series.
Advertisement:

Irozuku Sekai no Ashita kara ("From the Colour-Changing World's Tomorrow", or Iroduku: The World in Colours) is a thirteen-episode anime produced by P. A. Works, which aired in the Fall 2018 season. Iroduku is written by Yuuko Kakihara and directed by Toshiya Shinohara, while Yoshiaki Dewa composed the soundtrack. The series is available for streaming

Hitomi Tsukishiro is a seventeen-year-old who is descending from a family of witches. After her mother left, Hitomi lost her ability to resolve the world in colour and fell into melancholy, becoming distant with those around her. Hitomi's grandmother, Kohaku, decides to send her on a journey sixty years into the past, to 2018, and meet her seventeen-year-old self. While Hitomi feels out of place in the world six decades earlier, her curiosity is piqued when she learns that she can see colours in certain drawings. Learning that Yuito Aoi produced these drawings, Hitomi yearns to learn more, and in the process, befriends Chigusa, Shō, Kurimi, Asagi and Yuito classmates of Kohaku's. Hitomi ends up joining the Magic-Photography-Arts Club. Encouraged by everyone in the club, and inspired by Kohaku's determination to make others happy, Hitomi comes to rediscover the colours in her own world as she experiences support and friendship with Kohaku and her friends.

Iroduku: The World in Colours provides examples of: