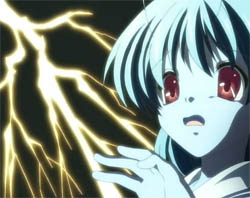 "Sunohara likes me." "EHHH?!"
A great shock is emphasized in the background with metaphorical lightning. As a gag, the character might be literally shocked as a result.
Advertisement:

Not to be confused with Lightning Glare or Beam of Enlightenment. Or Dramatic Thunder, which is... dramatic. And thunder. For a more direct metaphor of the effects of being struck by actual lightning (or other electric surges), see X-Ray Sparks.

Note that in French, this is an expression ("coup de foudre") meaning Love at First Sight.

Also not to be confused with the Electric-type attack from Pokémon.