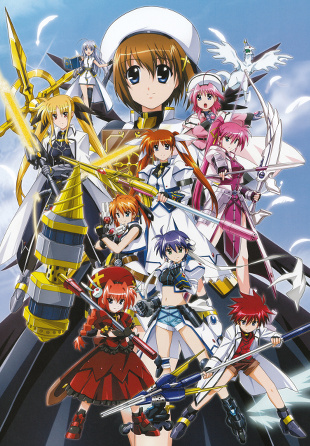 In the land where ancient crystals and infinite greed gather and intertwine,
the wings shall revive from the holy land beneath the dead king.
The dead shall dance, and the tower of law in the central lands shall burn to the ground,
and thence the ship of law that guards the many seas shall be torn apart.
Advertisement:

As their investigation into the Relics continues, Riot Force 6 comes into conflict with Mad Scientist Jail Scaglietti and his all-female group of cybernetic operatives, the Numbers. Jail is the mastermind behind a number of illegal projects, such as the creation of Artificial Mages and Combat Cyborgs, and now he has his eye set on the Relics. Riot Force 6 also runs into Vivio, a orphan of the same "Project F" that created Fate, who Nanoha and Fate decide to adopt as their own child. When Vivio is suddenly kidnapped by Jail, who intends to use her as the lynchpin of his ultimate plan, Riot Force 6 must mobilise to save her and stop Jail's plans once and for all.

Unlike the first two seasons, this one had a full 26 episodes instead of 13. It had the largest cast so far and shifted the tone to a darker, more SF/military feel.

It has a supplementary Slice of Life manga and Sound Stages that take place between the episodes. StrikerS Sound Stage X could be considered its Spin-Off, as it only features the new characters from this season.

Example of:
Has Two Mommies