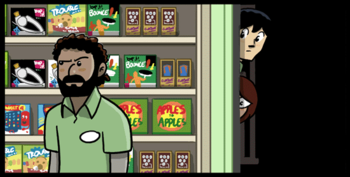 Someone has gotten ahold of a DNA strand of Jesus or his equivalent and has decided, hey, let's make another! Maybe they actually want to speed along the Second Coming a little, or maybe they want to throw in a little Mad Science with Religion.

If said scientists really do end up with Jesus Part Two, expect the baby to be spirited away by protagonists to be raised in a more wholesome manner, with the implication that the Big Guy Upstairs is moving this operation to more traditional pastures.

Of course, since cloning doesn't make the same person again one might end up with someone who uses their powers For Evil or giving a "screw this." Alternately, they might not even have any powers.

Contrast with You Cloned Hitler!.