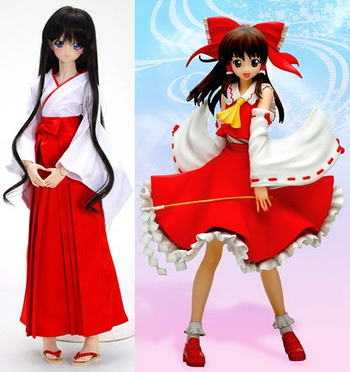 Left: The typical Miko. Right: The Touhou Project Miko
Certain activities or professions are associated with recognizable outfits. With Costume Exaggeration, this will be depicted with the most outlandish, extreme, or just plain fetishistic version of said outfit, even if the character otherwise wears a normal outfit most of the time. Sometimes the character will forget and just keep wearing the outfit long after it's needed, or will even seem not to remember putting it on. Often, this is done tongue-in-cheek by artists who really only want an excuse to put characters in fun costumes but is a very good indicator of the general 'serious' mood and focus of a series. It generally runs:

Ironically, having slightly less-than-maximum Costume Inertia doesn't always work since it implies designers know just enough about the minor details of an outfit and put just enough time into it that they probably have a personal jones for it.
Advertisement:

Occasionally the trope is played with in an Unreveal, where the 'normal' outfit appears instead of the predicted one - much to the disappointment of another character.

The Chainmail Bikini is essentially a subtrope of this; the Spy Catsuit and the Latex Spacesuit probably also qualify. Compare Impossibly Cool Clothes.