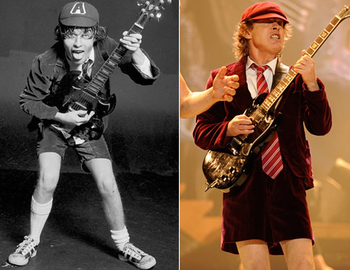 Someone continues wearing an iconic costume, even if they logically should no longer be doing so. Maybe they were simply wearing it as a one-off initially, or it was justified at the time, but it continues to be worn well after the justification has worn off. Alternatively, a common version is a school uniform being worn after graduation. Usually, the costume has become so iconic and associated with the character that changing it could lead to outcry from the fans, or even the author might be a fan.

Compare Limited Wardrobe which is when characters are seen wearing the same clothes day after day.