Spoilers for all Dragon Ball works preceding it will be left unmarked. You Have Been Warned! 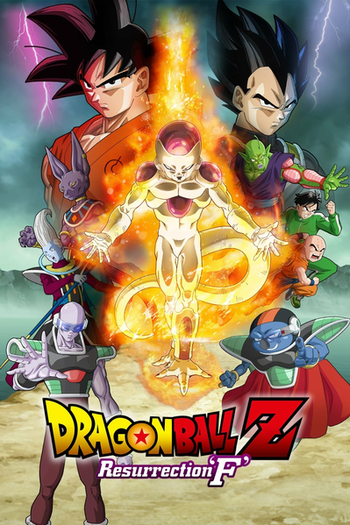 Now despair begins.
"The worst wish in history, that is the beginning of despair."
— Tagline
Advertisement:

Dragon Ball Z: Resurrection ‘F’ is the 19th official movie in the Dragon Ball franchise. Directed by Tadayoshi Yamamuro and released on April 18, 2015, it is a direct sequel to Battle of Gods and draws upon many elements from that film.

Some time after Goku's fight with Beerus (and Goku becoming a Super Saiyan God), the last remnants of Frieza's army find and use the Earth's Dragon Balls to wish Frieza back to life. Shenron grants their wish, but they get Frieza's body returned to them just as it was before Trunks blasted it into oblivion: partially mechanized... and cut into many, many pieces. After some time in an advanced healing chamber, Frieza emerges fully restored and more powerful than ever after training for the first time in his life — leaving the tyrant ready for both a fight with the Saiyans and an invasion of Earth to enact his revenge. Also, while Goku has a surprise in store for his old foe, Frieza didn't come looking for a fight without a surprise of his own to share.

For its release in the U.S., Funimation gave it a dubbed limited theatrical release (as they did with Battle of Gods), lasting from August 4th to August 12th of 2015. On October 20, 2015. The film came in three editions: standard DVD, Blu-ray and DVD combo pack, and Collector’s Edition. The Collector’s Edition includes no extra features, but different packaging and collectible character cards.

The trailers can be seen here,