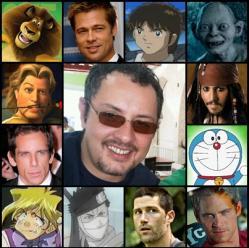 Ricardo Tejedo and some of his roles
Advertisement:

Ricardo Eduardo Tejedo Cota (born December 26, 1972 in Mexico City, Mexico), better known as Ricardo Tejedo, is a Mexican voice actor and dub director. The son of musician/actor/director Eduardo Tejedo, he began his career as a Child Prodigy in 1977 when he was introduced to the acting industry by the late Narciso Busquets, who was Eduardo's neighbor at the time. Despite Eduardo's initial misgivings, Tejedo decided to pursue a career in acting.

He is mostly known for his Pretty Boy and Big Brother Mentor roles. He is also the more or less official LA-Spanish VA for Johnny Depp, Ben Stiller and Brad Pitt.

As the VA for Johnny Depp

As the VA for Brad Pitt:

As the VA for other film actors: