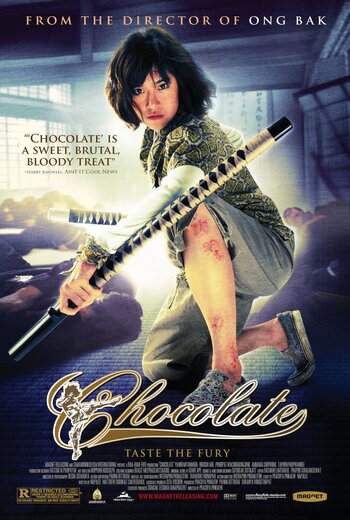 A 2008 Thai film about an autistic girl who goes after her ailing mother's debtors to pay for her chemotherapy.
Advertisement:

A Thai woman falls in love with a Japanese gangster, but they part ways after her employers disapprove... with violence. A few months after the split, she gives birth to Zen, a girl with autism. Said autism allows Zen to master martial arts moves by watching them. She also enjoys chocolate, thus the title.

When Zen's in her teenage years, her mother gets cancer and needs money for treatment. Zen's friend (and occasional caretaker) Moom finds a black book listing everyone who owed her mother money from her days as an enforcer. They head out to reclaim it... with violence.

Unfortunately, those people are with the same criminals that split up Zen's parents, and they're still hungry for revenge...

(For the 2000 film about a chocolaterie in a French village, see Chocolat.)