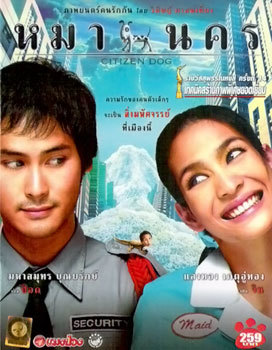 Citizen Dog (2004) is a very strange (and often very funny) Thai film by Wisit Sasanatieng. Calling it a Romantic Comedy doesn't quite do it justice, although its surrealism and quirky humour have seen it compared to the French film Amélie.
Advertisement:

The film follows the day-to-day life of Pod, a Thai Farm Boy who moves to Bangkok looking for a job. Although his old granny warns him that he'll grow a tail if he moves to the city, he does so anyway, and develops a crush on a girl who works in the same building as him. The rest of the film is about the weird, strangely touching adventures they have and the interesting characters they meet.

Has nothing to do with Citizen Kane.