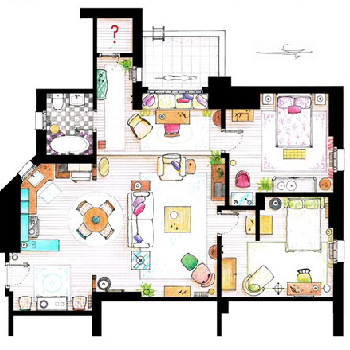 Just your average Manhattan accommodation for a waitress and a sous-chef.
Michael: I even watched all ten seasons of the show Friends. Boy, those friends really were friends, weren't they? Although, [...] how did they afford that apartment? A waitress and a chef, with those Manhattan real estate prices?
Eleanor: Yeah, we were all confused about that too.
—The Good Place

Your cast of good-looking single hangarounds live in a fancy apartment in the middle of the town. None of them seems to work, or if they do, they're usually actors, columnists or whatever leaves them with a lot of leisure time to have drama in their clean, well-furnished apartments. How can they afford it? They have Friends Rent Control, named after Friends, where the cast handwaved their situation by saying they had rent control.

Rent control means that a landlord can only raise a tenant's rent by a certain percentage each year, making it possible for long-term residents to continue paying low rents while the neighborhood around them gentrifies. Illegal subletting may be involved if the renter has only lived there a short time.

The most obvious cause of the trope is that larger sets are easier to film in. Even if the home is supposed to look relatively run-down or poor, it's a nightmare to block out scenes where characters are practically on top of each other and get in each other's way when they move around. Larger sets also let you break up the action into multiple locations, allowing for concurrent scenes and conversations within the same area.

However, not all large homes are necessarily examples of the trope. There are numerous mitigating factors that may justify why the characters' can afford such a large home:

See also Living in a Furniture Store, Standardized Sitcom Housing, and Pretty Freeloaders. The folks living in such an apartment may or may not have an Improbable Food Budget. Usually not an issue for Big Fancy House-dwellers, as they tend to be fantastically wealthy to start with. Related to Informed Poverty, where characters who are supposed to be suffering financially seem to live very well.