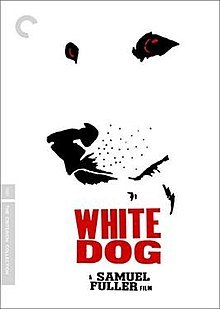 White Dog is a 1982 drama film directed by Samuel Fuller and starring Kristy McNichol and Paul Winfield. Julie Sawyer (McNichol), a young actress, takes in an all-white German Shepherd that she accidentally hit with her car, only to discover that he is a "white dog" — a dog trained to viciously attack black people. Rather than euthanize him, Julie enlists the black animal trainer Keys (Winfield) to try to undo the dog's training.
Advertisement:

Not to be confused with White God, another film centering on a dog.