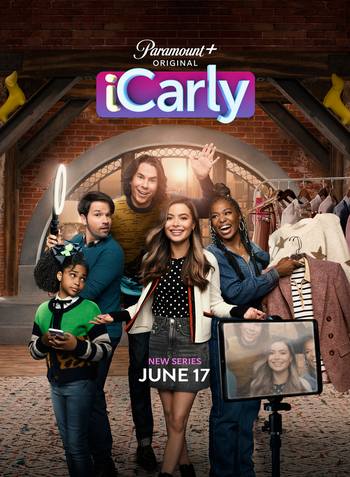 Ready in 5, 4, 3, 2…note From left to right: Millicent, Freddie, Spencer, Carly and Harper
Carly: You think you can shoot me with a filter that makes my cheekbones all...? [puckers her lips]
Freddie: That filter that makes you look like an alien?
Carly: A sexy alien.
Advertisement:

iCarly is an American web television sitcom streaming on Paramount+. It is a revival of the Nickelodeon sitcom of the same name. Miranda Cosgrove, Nathan Kress, and Jerry Trainor have reprised their roles as Carly, Freddie, and Spencer, respectively. Jennette McCurdy and Noah Munck did not reprise their roles as Sam and Gibby respectively due to the former's retirement from acting and the latter pursuing other projects, leading to their characters being excluded.

In this revival series, Carly and Freddie are all grown up and Spencer is now filthy rich after his half-meltednote Due to his cell phone randomly catching fire next to it. marshmallow white house sculpture received lots of praise and sold for a ton of money. Carly has her own apartment right across from her brother, which she shares with her new best friend Harper Bettencourt (played by Laci Mosley) a pansexual barista who dreams of being a stylist. Carly's long-time boyfriend Beau dumps her during a livestream and she falls into a deep depression. A month later, Carly encounters New Old Flame Luke at one of Spencer's parties and, to make Beau jealous, plans to launch a new web show with Luke, only for her to call things off her mind after realizing she and Luke have no chemistry. Carly really misses doing the iCarly web show and decides to resurrect it. But since Sam is no longer around after having joined a motorcycle gang called the Obliterators, Carly hosts the show on her own, with Freddie once again behind the camera (actually a Pearphone this time) and Spencer providing assistance whenever needed. Freddie, meanwhile, has been through two failed marriages and his startup company went under, so he's back living with his mother, only now he's joined by his adopted stepdaughter Millicent Mitchell (played by Jaidyn Triplett), a snarky, middling internet creator who views Carly as a rival.

Carly refuses to speak about what the goat did to make her 15th birthday the worst ever.

Carly refuses to speak about what the goat did to make her 15th birthday the worst ever.