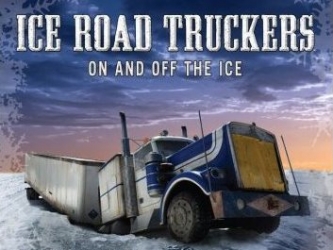 "These are the truckers who make their living on thin ice."
— Thom Beers
Advertisement:

In 1999, The History Channel aired a 46-minute episode titled "Ice Road Truckers" as part of the Suicide Missions series. Based on the book Denison's Ice Road by Edith Iglauer, the episode detailed the treacherous job of driving trucks over frozen lakes, also known as ice roads, in Canada's Northwest Territories. After 2000, reruns of the documentary were aired as an episode of the series Modern Marvels instead. Under this banner, the Ice Road Truckers show garnered very good ratings.

In 2006, The History Channel hired Thom Beers, owner of Original Productions and executive producer of Deadliest Catch, to create a series based on the Ice Road by Beers. Shot in high definition (although the season ended before History HD was launched in the US), the show "charts two months in the lives of six extraordinary men who haul vital supplies to diamond mines and other remote locations over frozen lakes that double as roads". During the finale of the show's first season of 10 episodes, The History Channel aired a promo for season 2 which began airing on June 8, 2008. Season 1 of Ice Road Truckers was shown on the British national commercial Channel 5 in February/March 2008. In Australia it aired on Austar and Foxtel in early 2008 and from June 18 it also began being shown on Network Ten. In autumn 2008 season one aired on RTL 7 in The Netherlands. During the late summer of 2015, The History Channel began broadcasting season 9, driving across North Central Canada's frozen roads and frozen over lakes and rivers.

Season 10 premiered on The History Channel on Thursday, August 4th, 2016.

Spinoff series IRT: Deadliest Roads began airing in October 2010. The first season sent three veteran Ice Road Truckers, and one new trucker from Alabama, to India to deal with treacherously steep, narrow, and crowded roads in the Himalayas. A second season premiered in September 2011, this time sending six North American truckers to South America. They hauled freight along the hazardous Yungas Road (also known as El Camino de la Muerte, "The Death Road") in Bolivia, then relocated to Peru to bring loads to sites high in the Andes mountain range.