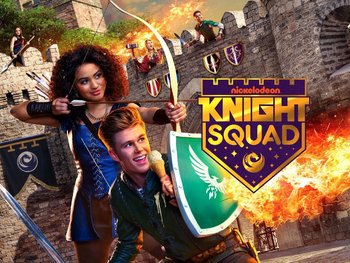 Arc: Do you wanna know a secret?
Ciara: I’m a princess whose father won’t let her become a knight. So, I use a magic ring and secretly train as Ciara.
Arc: And I’m Arc, a charming thief who has the same dream.
Ciara: But people from outside the kingdom aren’t allowed in Knight School.
Arc: So I’m pretending I belong here.
Ciara: Now, we protect each other’s secrets...
Arc: So we can achieve our dream of becoming knights!
— Opening Narration
Advertisement:

Knight Squad is a Nickelodeon Kid Com that premiered in February 2018.

The series is set in the fictional magical kingdom of Astoria. Arc wants to become a knight but is a son of a commoner thief, a secret that Ciara discovers. Ciara is secretly the princess of Astoria whose father refuses to allow her to become a knight, something Arc discovers. Both have to keep each other's secret as they become teammates along with Prudence and Warwickon the Phoenix Squad, which is a team competing against other squads to become the newest knights in the kindgom.

On February 1, 2019, it was announced on Twitter that the show has wrapped up filming and will be ending after roughly two seasons. The final episode aired April 20, 2019.