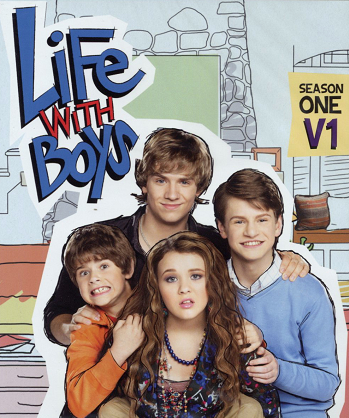 A variety of Sitcom in which the main characters are children or teenagers, with adults relegated to supporting or background roles such as mentors or authority figures. Such shows naturally tend to cover more kid-oriented situations and plots, and often make good (and repeated) use of Can't Get Away with Nuthin' and the Very Special Episode. Status Quo Is God is the rule in most of them (thus falling into level 2 of the Sliding Scale of Continuity).

Perhaps the most common setting for a Kid Com is an academic one, with the characters being schoolmates, essentially the junior version of a Work Com. But it can also follow a group of youngsters who just hang out at the local Malt Shop or other "clubhouse"-type location.

Dom Coms generally don't qualify for inclusion in this category, since the protagonistic roles tend to be reversed (parents as main characters, children as supporting). However, a Dom Com can double as a Kid Com if the primary focus is on the children rather than the adults or the family as a whole.

During The '70s and The '80s, the Kid Com was a staple of network television. For most of the 2000s, a large percentage of them were made by either Schneider's Bakery for Nickelodeon or It's A Laugh Productions for the Disney Channel, much to the chagrin of fans of their more adventurous animated offerings. In any case they're often an end-run around regulations regarding advertising to children. Since most of those set an upper limit of 12 and treat adolescents as a separate category, by creating a live-action show with a mostly-teenage cast they can claim teens as the main demographic while actually aiming an age group or two lower.

That said, bear in mind that this genre is not limited demographically, and there have been plenty of examples - with some of the most famous being Malcolm in the Middle and South Park - of Kid Coms aimed at older audiences.

Often prone to Dawson Casting (though frequently subverted in recent years). Those originating in Canada draw from the same smallish pool of actors, with many kids appearing in several before going Darker and Edgier with a turn on Degrassi.

Contrast Tween Drama, a drama program aimed towards kids 13 and under.