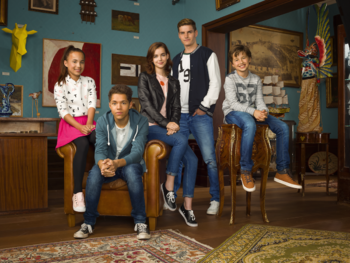 The Hunter children, none of whom are related to each other
Advertisement:

Hunter Street is a Mystery show that airs on Nickelodeon. This show is produced in the Netherlands by Blooming Media.

Problem child Max has failed to place with every family who tried to adopt him, due to his limitless capacity for pranks and practical jokes. He is down to his last option, the Hunter family, who is very fond of raising adopted children, he is the fifth one they've taken on when the pilot episode commences.

His new parents, Erik and Kate, disappear when they go to a night out at the opera, leaving the children with no adult supervision and a mystery to solve.

Season 2 premiered on January 29 2018, set six months after the first season and introduces Jake, the newest member of the Hunter family. When Erik is framed for a crime at a local museum, the Hunters kids set out to exonerate their father and uncover their newest mystery.

Season 3 focuses on Anika and her connection to a mysterious Aztec pyramid, associated with a long lost treasure.