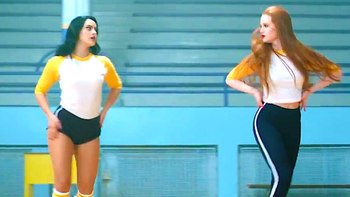 Lodge vs. Blossom for the queen of Riverdale's River Vixens Cheer Squad!
Ronan: ...What are you doing?
Star-Lord: Dance-off, bro! Me and you!
— Guardians of the Galaxy
Advertisement:

The Dance off is a type of contest, but rather than one anyone can enter, it's a form of duel between two or more mutual antagonists, either singular or more commonly groups.

For one reason or another, one dancer or group of dancers (often the Dancing Royalty) is convinced their moves are the best, the sweetest, the most unbeatable. But someone else challenges them, to knock them down a few pegs, or for the attention of a Love Interest. The Trope is usually a fun or comedy trope but can venture into Duel to the Death territory if the stakes become high enough. The challenge does not even have to be formally made.

Usually the dancers take turns showing off their increasingly elaborate moves until one person or group concedes they have nothing left. Or they can't match the moves of the other. OR one or both dancers themselves into collapsing from exhaustion.

While it is possible for a participant to be a Dance Battler, that trope is not employed here; the dance-off does not contain actual combat.

Dance Off is a Sister Trope to Cooking Duel, wherein the duel is usually something silly for silly reasons with silly weapons of choice. Compare Battle of the Bands. When competing over a Love Interest, this trope revolves around Artists Are Attractive.