"Make an X with your arms! Now break it!"
— Shuri (explaining the Wakandan greeting, serving as a weapon trigger), Black Panther

When two people meet formally for the first time, it is customary for them to shake hands. The handshake is initiated when the two hands touch, immediately. It is commonly done upon meeting, greeting, parting, offering congratulations, expressing gratitude, or completing an agreement. In sports or other competitive activities, it is also done as a sign of good sportsmanship. Its purpose is to convey trust, balance, and equality.

This trope is about when, instead of the usual handshake as a greeting gesture, the characters use a variation, each of which has its own connotations. Most of these variations are less formal than a handshake, but some retain the formality. While mostly a Western Media trope, it has found its way into eastern media on occasion.

Handshake substitutes that have their own tropes: 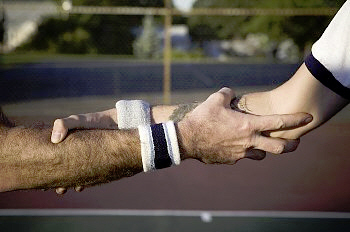 "You are my equal, sir, and I honor/greet/salute you."

This is the variation closest to an actual handshake, and is quite possibly its precursor. Instead of exchanging handgrips, the two clasp each others' forearms, just below the elbow. It is considered archaic and often 'knightly', the kind of greeting warriors of old gave each other, supposedly to prove they didn't have a knife up their sleeve. 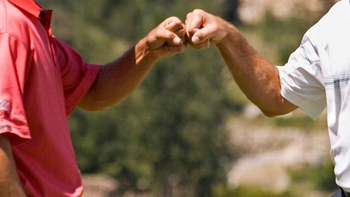 A less excitable version, this substitute is decidedly casual. It's somewhere in between a handshake and a high-five in meaning, combining greeting with familiarity and victory. Two people pump their fists against each other, but like with a too-strong grip in a handshake, bumping too hard is considered rude and needlessly confrontational. Bumping other parts of the arm together instead of the fist is also acceptable.

Colloquially known as the brofist, though this term has a relatively different significance. A brofist is better defined as a light touch of the fists or the knuckles, and it is used more frequently as a commemorative or celebratory gesture of one (or both) of them having scored/scoring. 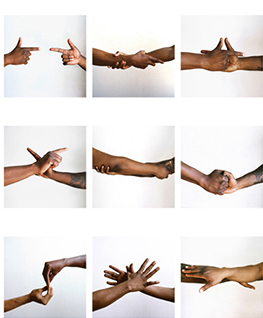 A more 'fun' version. Though it can refer to many kinds of greetings involving hand contact, dap is best known as a complicated routine of shakes, slaps, snaps, and other contact that must be known completely by both parties involved. Often includes a Pound Hug. 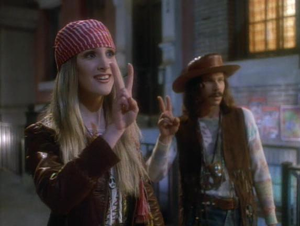 Falling steadily out of favor since 1960s ended, the Peace Sign is a leftover from the 'hippie days'. It involves making a V with one's index and middle finger while curling the remaining digits, and then holding the hand up near the shoulder. The "V for Victory" variation—in which the hand is held out triumphantly, similar to Giving Someone the Pointer Finger—is far more common in Anime than in western media.

Upon meeting each other, Alex & Sig become instant best buddies after flexing their muscles...and then they team up to kill Sloth

Upon meeting each other, Alex & Sig become instant best buddies after flexing their muscles...and then they team up to kill Sloth