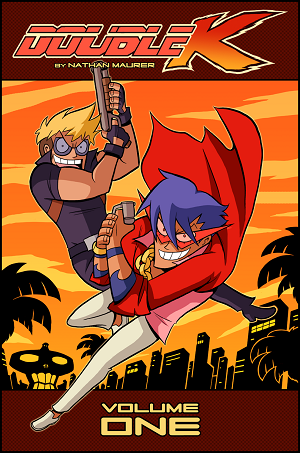 THE INCOMPARABLE SUPERCOPS
DOUBLE K
A COP DRAMA LIKE NONE YOU'VE EVER SEEN
A TOWERING TRIBUTE TO ONE OF THE GREATEST TELEVISION SERIES LIKE EVER
AND THE CULMINATION OF THE DREAMS OF A VAST CADRE OF DUDES FROM 4CHAN
Will hit your EYEBALLS from ACROSS THE INTERNET ON APRIL 12th OF THIS VERY YEAR
A new installment EACH WEEK, MWF
BE PREPARED
BECAUSE THIS SHIT JUST GOT EVEN MORE REAL THAN YOU COULD POSSIBLY HAVE IMAGINED
Advertisement:

Imagine an 80's Buddy Cop Show, like Starsky & Hutch, or better yet, Miami Vice. Got the bad acting, and cheesy one-liners, and horrible outfits filling your brain? Good. But most of all, do you remember the explosions, the gunfights, and the invincible protagonists who always fought against all odds to save the day? One man over at deviantART did. That man was Nathan "Captain Osaka" Maurer, who decided to resurrect the buddy cop genre with the aid of... the cast of Tengen Toppa Gurren Lagann?

, the comic so intense and over the top its name is written in ALL CAPS. Starring Kamina and Kittan as the titular buddy cop duo, DOUBLE K mirrors the story of Tengen Toppa Gurren Lagann in the world of Teppelin Beach, a Miami Beach parody that is under the watchful eye of the GPD.

What follows in this setting has to be seen to be believed, with fantastic art, brilliant jokes, and enough Gurren Lagann in-jokes to make any fan of buddy cop films and/or of Gurren Lagann laugh and watch in awe as the protagonists do ever greater feats.

Somewhat extraordinarily for a fan-comic, paperback editions of it do exist, evading copyright issues by being sold at a loss. DOUBLE K: VOLUME 0, which covered the first 50 pages, was distributed at Anime Expo 2010 in very limited quantities, and sold out almost immediately. VOLUME 1 covered the first 5 chapters of the book (with earlier pages seeing an exclusive re-mastering), and was both distributed and funded via this KickStarter project

. Which succeeded so far beyond its fundraising goals that, ironically, it created substantial delays due to having to print vastly more books than planned.

But sadly, after a year with no updates, Maurer closed his online store and the DOUBLE K website on Smack Jeeves. The comic then remained available only through Maurer's DeviantART account

for a couple more years until he, to quote a random DeviantART commenter, "did a hiimdaisy and deleted it all." note Not the account, though, just the comic. The account itself is still there, but, as of September 2017, there has been little to no activity in it. Although, he did delete his Twitter and Tumblr accounts, so there's that.

Still, the large readerbase that the comic had gathered meant that an unofficial Imgur mirror

was made just a year before the comic's untimely demise. In fact, even the comic's site on Smack Jeeves is not completely lost, as captures of it have been made by the Wayback Machine and can be found through this link

By the way, speaking of saving copies (or Circulating the Tapes, if you will), feel free to dowload said Imgur mirror and upload it on more reliable long-term hosts such as the Internet Archive