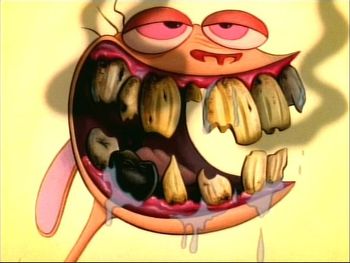 "I've never brushed before, and I'm not about to start now."

An Extreme Close-Up of something disgusting. For some reason, these pop up most in comedy and horror, though in practice, it's more Nausea Fuel than anything else. If done in an animated series, the close-up is usually drawn in a much more detailed style than the rest of the show.

Trope codifier is The Ren & Stimpy Show as it was used extensively in the show, but the trope can be considered older than dirt in the sense that looking at something up close is bound to reveal its imperfections. John Kricfalusi, the creator of Ren & Stimpy says he drew the inspiration from Fleischer Popeye cartoons, though it was co-creator Bob Camp who coined the term "gross up." The phenomenon spawned many copycats of both the Gross-Up Close-Ups, the original show's disgustingly revolting aesthetics and the revived Deranged Animation. Currently, this trope can be spotted in a number of shows and usually leads to visual Memetic Mutation.

Essentially the opposite of a Discretion Shot. Compare Nightmare Face, a trope that gets a lot of these kind of close-ups. Frequently occuring in many a Grossout Show. Also a staple of Sensory Abuse.