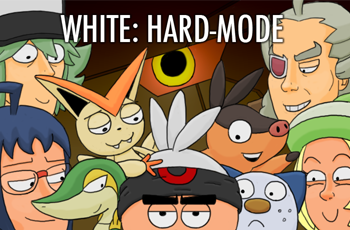 This doesn't even cover what happened beforehand.
"I believe this is all happening for a reason."
Advertisement:

is a retelling of the author's playthrough of Pokémon Ruby, Pokémon FireRed, and Pokémon White. Seeking a new challenge, he decided to play the games with some additional rules.

Through these rules, he found a new respect for Pokémon that he originally considered trash. The webcomic details his playthrough with more dramatic and comedic emphasis.

The comic itself has spawned many fan comics hosted on its site as well as becoming a popular Self-Imposed Challenge among the Pokémon fandom.

Apart from the name of the comic and the nickname of the author, the original set of the rules is also known as Nuzlocke. The fans are encouraged to do the same, and the most widely accepted rules are: the original two, with the exception to the first one that if you have already caught the first Pokémon you encounter on the location, you're allowed to safely ignore it, you are allowed to catch all shinies (because they are so incredibly rare you may not even see one); and last, but not least, you should nickname everything.

Starting in September 2012, the website introduced two new non-Pokémon-related comics: Space Cat and SpeedRun (canceled as of April 2013). Space Cat may get its own page some time in the future.

Also see the list of fan runs. A character Page is now under construction.