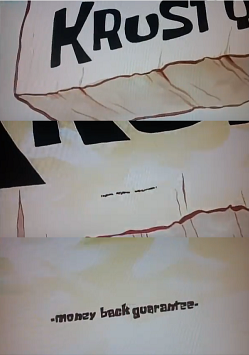 The Krusty Krab money back guarantee. It's there if you know where to look for it.
Advertisement:

If a commercial requires a disclaimer, usually for legal reasons, the people creating the ad will put it at the bottom of the screen in tiny, low-contrast text using a hard-to-read font, and then leave it up for only a split second.

In theory this is so that the viewers won't be distracted from their desire to buy the product by any nagging doubts the content of the disclaimer might raise.

It is usually impossible to read the entirely of the text without pausing the video. In some ads, particularly those viewed in standard definition, the text may be so small and the resolution so low that it is rendered illegible entirely.

For the auditory equivalent, where disclaimers are read inhumanly fast, see Rattling Off Legal.

open/close all folders
Advertising
Films — Live-Action
Literature
Advertisement:
Live-Action TV
Print Media
Video Games
Web Animation
Web Comics
Western Animation
Real Life
Disclaimer
TV Tropes takes no liability for:
- Any loss of opportunity for fraud and deceit as the result of the public reading this article.
- Any consequences of reading this article, including, but not limited to, direct consequences like chest discomfort, headache, loss of faith in humanity, insanity, or the planet Earth suddenly being compressed to the size of a pinhead.
Feedback

Bubble Bass points out a "money back guarantee" clause in the Krusty Krab's menu, which is very tiny.

Bubble Bass points out a "money back guarantee" clause in the Krusty Krab's menu, which is very tiny.