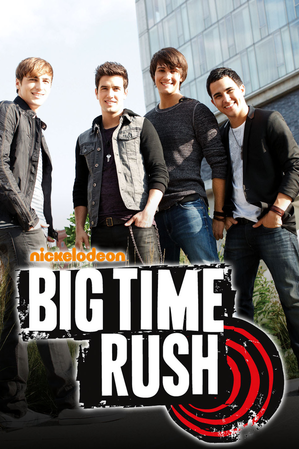 Big Time Rush is a Nickelodeon Sitcom about a boy band created by Scott Fellows (You know? The dude behind Ned's Declassified School Survival Guide, Johnny Test, and Supernoobs). The show debuted in November 2009 and ended on Thursday, July 25, 2013.

Kendall, James, Carlos, and Logan are four hockey players from small-town Minnesota. James dreams of becoming a pop star, so when Gustavo Rocque, the ridiculously stuck-up producer for Rocque Records, comes to their town looking for talent, he gets all of his friends to audition with him. Unfortunately, Gustavo hates him but loves Kendall, who doesn't do the whole rich and famous act. In the end, he agrees to record some demos in Los Angeles as long as Rocque takes his friends, too, and makes them a singing group. They find out they only have three days to become a passable band, and Hilarity Ensues.

The four eventually manage to succeed and the series chronicles the group's rise to stardom as they move to L.A. (along with Kendall's mother and little sister) and do their best to keep the band and their new careers alive through the workings of a demanding and, at times, controlling industry while likewise getting into silly shenanigans. The show's sense of comedy is so over-the-top at times that it seems to resemble a real-life cartoon down to using a slew of classic cartoon tropes.

It ran a respectable four seasons along with a Made-for-TV Movie aptly titled Big Time Movie where the band tours England and, in the process, foils a plot to take over the world. The series finale aired in July 2013 in the U.S. with the one-hour episode, "Big Time Dreams".

For the band itself, see here.

Staring into the eyes of the sun to find the killer hook.

Example of:
Blinded by the Sun

Staring into the eyes of the sun to find the killer hook.