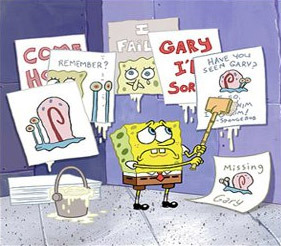 Have you seen this snail?
More than a pet, you're my best friend
Too cool to forget, come back 'cause we are family and
Forgive me for making you wanna roam.
And now my heart is beating like the saddest metronome.
Somewhere I hope you're reading my latest three-word poem:
"Gary come home."
— "Gary's Song" (commonly known as "Gary, Come Home"), SpongeBob SquarePants
Advertisement:

A character and their pet are nearly inseparable, until the pet goes missing. For some reason, a character's pet will wander away from home, get kidnapped, or get itself lost some other way. This leads to two separate storylines. On one side, the pet is incredibly lost, scared, and desperately trying to get home. The second story will involve the characters dealing with the loss of their pet, either by feeling miserable or by actively searching for them. In the end, the two parties will eventually reunite, maybe even with An Aesop or two.

May overlap with I Will Wait for You where the human refuses to give up on waiting or to get a new pet. When the pet has been driven away by a cruel owner instead of getting lost, it's Come Back, My Pet!. The human equivalent of this is There's No Place Like Home.

The trope namer is, of course, Tropey the Wonder Dog.

Phineas, Ferb and the gang use the power of music to help Perry come home.

Phineas, Ferb and the gang use the power of music to help Perry come home.