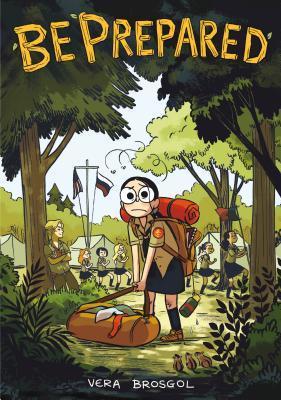 Be Prepared is a Slice of Life Comic Book by Vera Brosgol. It's a fictionalized account of what happened to Brosgol when she went to summer camp as a child.

Every year, Vera and her brother Phillip have always been the only kids in their neighbourhood to never go to camp for the summer. Well, after a disastrous ninth birthday party, Vera got word of the Organization of Russian Razvedchiki in America (or ORRA for short), a Russian Summer camp. Already enthusiastic about the idea, Vera begs her mother to send her there. Her mother agrees, and pays to send her there for two weeks with her brother (much to his chagrin).

Soon after she arrives, however, she discovers that the camp isn't quite as much fun as she had expected. The bathroom is disgusting, the other kids are older than her, and quite nasty to boot, and the church is held outside rain or shine. Now all Vera wants is to be back home.

Be Prepared contains examples of: