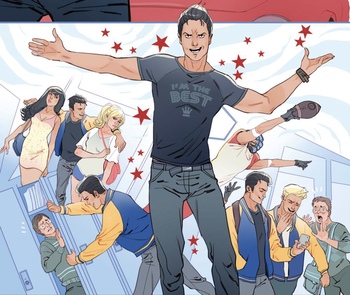 He's large and in charge, and don't you forget it.
Advertisement:

In almost every high school movie, there's always that one guy who rises to the top of the Popularity Food Chain thanks to his good looks, charisma, and natural confidence. That guy who everyone worships like a prince, who always gets the girl, who has the entire school eating out of the palm of his hand.

If the less popular students are lucky, this one guy will be a Nice Guy who rules the school while being laid-back, friendly to everyone, and generally awesome.

If the losers are unlucky, they'll get this trope instead.

The Big Jerk On Campus is the most handsome and popular boy in school-as well as the meanest and most aggressive. Like the Alpha Bitch, he only cares about himself and his status, and is not above bullying anyone he considers to be below him on the school totem pole, or anyone who threatens his spot at the top.

When it comes to bullying and intimidation methods, the Big Jerk can go two ways, or a mix of both. The traditional method is threatening his classmates into submission through physical violence and humiliation, like beatings, pantsing, and pranks that involve physical ability. Or, for sneakier tactics, he can take a page out of the Alpha Bitch's book and use his brains rather than his fists, using manipulation and emotional cruelty to keep his enemies in line.

A story with the Big Jerk can go different ways, depending on the gender of the protagonist. If the hero of the story is male, they will definitely be a Cool Loser who hates the Big Jerk (and perhaps secretly envies him). In the end, the hero will rise above the BJ's cruelty, knock him off his throne, and steal his girlfriend (that is, if the Jerk's girlfriend is a Nice Girl and not an Alpha Bitch).

If the protagonist is female, the story can go in all sorts of different directions. The female hero can be a school dork who's desperate to be part of the popular crowd, the Cool Loser who thinks Celebrity Is Overrated, and thus so are the cool kids, or she can be the Class Princess or Lovable Alpha Bitch that is the Big Jerk's equal at the top of the food chain. She can even start out as a full-blown Alpha Bitch whose story is about redeeming herself and realizing that popularity isn't everything.

From there, the story can go three ways:

The male counterpart to the Alpha Bitch, although he is much less likely to get redemption than her. The Evil Counterpart of Big Man on Campus. More often than not, he is a Future Loser whose Glory Days will end after his graduation.

open/close all folders
Anime & Manga
Comic Books
Fan Works
Athens (to his allies): And don't try to revolt again! Your tribute money is going straight to the army that'll put you back down! Didn't you get the memo? "If anyone in the cities strikes silver coins and does not use the currency, weights and measures of the Athenians, but foreign currency, weights and measures? exact penal retribution". A court issue? No no no no, if we want to keep criminals in check, we should use the same court. Mine. You know that food you're eating? You owe it to the grain-mother, the Goddess Demeter? Did I mention she was Athenian too? You basically owe us for that food.
Films — Animated
Films — Live-Action
Literature
Live-Action TV
Professional Wrestling
Theatre
Video Games
Western Animation