Film / He's All That 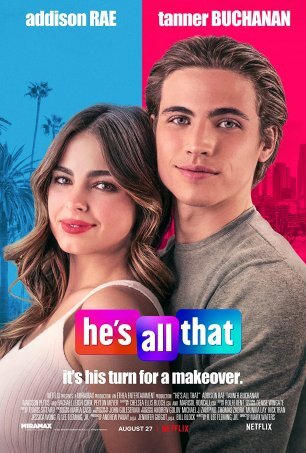 He’s All That is a Gender Flipped version of the classic teen movie She's All That, starring Addison Rae, Tanner Buchanan, Madison Pettis, Peyton Meyer, and featuring Rachael Leigh Cook, who played the female lead in the original movie, as Padgett’s mother.

After her humiliating breakup with her Jerkass boyfriend goes viral, social media influencer Padgett Sawyer (Rae), finds her reputation in tatters, both online and IRL. To win back public opinion and her sponsorships, as well as stick it to her ex, Padgett declares that she will use her makeover skills on a guy and make him handsome and popular enough to win prom king within a matter of weeks. The mission soon turns into a bet with her best friend, and to prove her skills, the lucky candidate must be an unpopular loser. Enter Cameron Kweller, an anti-social rebel photographer.

The race is on as Padgett puts her makeover expertise to work to transform Cameron from Cool Loser to Big Man on Campus. But the closer Padgett gets to Cameron, the more she finds herself falling for him. And with a backstabbing bestie and a recently-dumped ex who wants her back, Padgett finds that winning this bet might make her lose the things that are most important.