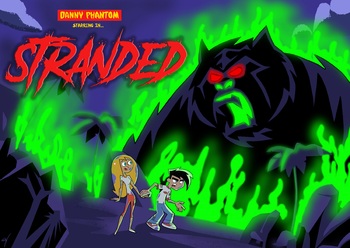 is a Danny Phantom Series Fic written by Flower princess11.

The series start with the original story, Stranded. In which Danny and Star, both who openly dislike one another, end up stranded on an island with a ghostly monster. Their decision to work together to survive would be the start of their feelings towards each other changing.

The story is continued in Trapped

, where Star is obsessed with learning about Danny and his secret.

The third story is called Lost

, where Danny and Star get lost in the Ghost Zone together.

, where it focuses on Sam and Star's rivalry.

, where Star meets Danielle while house-sitting for Danny.

, where a sickness may prevent Star from joining Danny's birthday celebration.

, where Danny and Star try to enjoy their first Valentine's Day but a ghost curses them.

, which focuses on Star discovering that her father has a new girlfriend.

, where an old invention of the Fentons splits Danny into two. Takes place after Cursed and before Unprepared.

The eleventh story is called Mistaken

, where a ghost mistakenly believes Star to be the reincarnation of his old crush. Takes place one week after Unprepared.

The twelfth story is called Dreamt

, where Nocturn is back and Star must save the day. Takes place between Unprepared and Mistaken.

The thirteenth story is called Dressed

, where Star and Colette enter a pageant.

The fourteenth story is called Visited

, where Danny and Star tell Dani about the time they were visited by relatives.

The fifteenth story is called Envied

, where Danny attracts a new admirer. Takes place between Dressed and Visited.

Outside of this is a short side-story called Sunk

, by NeoMark. It is set before Stuck. Remembering how rude she was to Danny at the water park during the events of ''Lucky in Love", Star insists they go out on a date there to make up for it, unaware there are a few people wanting to interfere.

NeoMark made another side-story. It's called Swapped

NeoMark also made one called Bonding

. It takes place after "Found" but has flashbacks from before it.

NeoMark also made one called Protected

, where Danny and Star babysit the latter's half-brother and Walker is so desperate to recapture Danny he's willing to release other prisoners.

NeoMark also made one called Drawn

, where characters from the Danny Phantom comic turn real.

NeoMark also made one called Boxed

, where Danny's forced into a boxing tournament for ghosts and Star's Dad is celebrating his birthday.