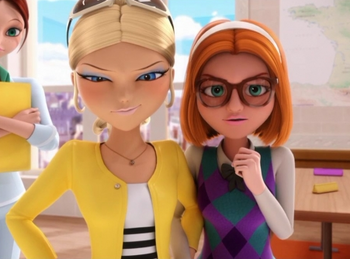 Seen here in her natural habitat beside the alpha female.
"No, it's not the queen bee who is cruel. It's the lieutenant bees, the seconds in command, the other cool girls who have ascended to a high station but can only dream of being the queen bee herself. It is through them, typically unconsciously on the part of the queen bee, that the cruelty is meted out. No one is more threatened by the possibility of someone else climbing up the totem pole than the ones whose grasp on it is still precarious."
— Frederik DeBoer

Every Alpha Bitch needs a right hand gal pal. Someone to order the students to Make Way for the Princess, someone to give orders to the Girl Posse on behalf of the Alpha Bitch, someone to nod along with the Alpha Bitch's comments and sneer at her victims, you get the picture—she is The Dragon to the Alpha Bitch. The Beta Bitch is the BFF to an existing Alpha Bitch; they're likely to be Childhood Friends. She's usually there to assist her in her schemes and act as a gossip buddy. A lot of the time she's more like a servant and is treated like one by her supposed friend, thus making her an Ineffectual Sympathetic Villain. Other times she might be waiting in the wings for her chance to backstab her and usurp the role for herself, in which case it will probably prove there is a Popularity Cycle at work.

Has nothing to do with Super Mecha Death Christ 2000 B.C. Version 4.0 Beta Bitch.