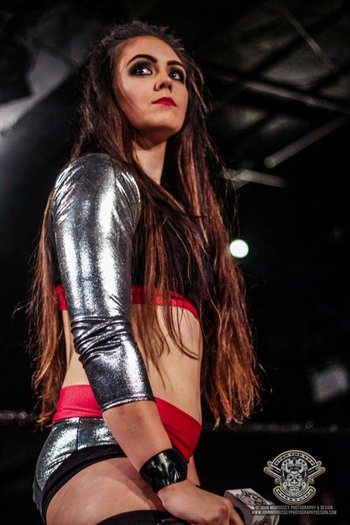 Katey Harvey is a professional wrestler, based primarily in her home country of Ireland. She made her debut in mid-2011 and soon became a recognisable character on the Irish indie scene. She initially managed a tag team called Rough Stuff (Bull Reilly and Paul Scarfe) and led them to win the Tag Team Championships, but soon branched out on her own. She has competed all around Europe and the UK in addition to Ireland. In 2015 she became the first ever Irish Women's Champion. She has also competed in (and won) respectively the first female: tag team match, triple threat match, Fatal 4 Way match. She and Danger Dawn were also the first women to wrestle in the main event of an Irish show in 2012.

She is a regular character at both Celtic Championship Wrestling and Over The Top Wrestling. Among the women she has wrestled - Becky Lynch, Melina and Nikki Cross.