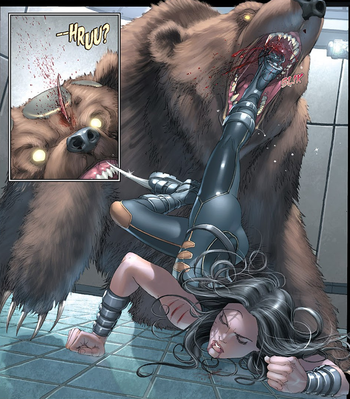 Of course, being a clone of Wolverine makes it more possible for her to do this to a bear. In reality, a woman her size would be dead.
"Start with the part where Jayne gets knocked out by a 90-pound girl, 'cause... I don't think that's ever getting old."
— Wash, Serenity
Advertisement:

An Action Girl appears otherwise slender, svelte, or "waifish", with a near-total lack of visible musculature. Despite this, they are capable of holding their own or even overpowering warriors many times their size, while utilizing "Waif-Fu", a ballet-esque fighting style that goes out of its way to show off their curves and feminine assets.

This is a tiny bit Truth in Television as women, even ones with big looking muscle, usually can't match men for upper body strength and speed. However, women are often more flexible, so it makes some sense they might want to use that advantage. This still doesn't eliminate the lack of mass and power thus a woman's hits won't pack as much of a punch (the reason why weight categories exist in combat sports).

Related tropes: A subtrope of Pintsized Powerhouse. Often used by Little Miss Badass, Mama Bear, Weak, but Skilled, Cute Bruiser, and Lady of War. Contrast and compare with Amazonian Beauty, Brawn Hilda, Statuesque Stunner, Glacier Waif who uses a completely different style of combat and Vasquez Always Dies where the females who do look like they can wipe the floor with you ... don't. The female version of Charles Atlas Superpower and often associated with Muscles Are Meaningless and Awesomeness by Analysis. Normally used with a lot of She-Fu acrobatics and turns, implying mystic martial arts.

Not to be confused with waifu, although there definitely is plenty of overlap there.

Among the sensates, Sun is the best hand-to-hand fighter, despite being smaller than most of her opponents and her male cluster mates.

Here, Will is concerned about having to face four guards. Sun manifests, having no reservations.

Among the sensates, Sun is the best hand-to-hand fighter, despite being smaller than most of her opponents and her male cluster mates.

Here, Will is concerned about having to face four guards. Sun manifests, having no reservations.