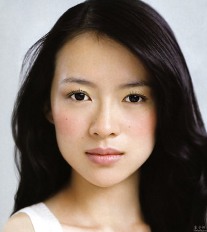 "You want to know who I am? I am the Invincible Sword Goddess, armed with the Green Destiny that knows no equal! Be you Li or Southern Crane, bow your head and ask for mercy! I am the dragon from the desert, who comes from nowhere and leaves no trace! Today I fly over Yu-Mei. Tomorrow I topple Mount Wudan!"
— Jen, Crouching Tiger, Hidden Dragon
Advertisement:

Zhang Ziyi (章子怡, born 9 February 1979 in Beijing, China) is a Chinese actress, mostly famous outside of her home country for her roles in Wuxia movies.

Born in Beijing, she started studying dance at age 8, joined the Beijing Dance Academy aged 11, won the national youth dance championship aged 15, and from that point started appearing in TV commercials in Hong Kong. She then enlisted at the Central Academy of Drama, and got her cinematic break playing the main character of Zhang Yimou's The Road Home at age 19.

She earned international fame the following year by playing Jen in Crouching Tiger, Hidden Dragon. She has since then played in such films as Hero (2002), Rush Hour 2, 2046, House of Flying Daggers, Memoirs of a Geisha, The Banquet, the Chinese government-sponsored Founding of a Republic and an adaptation of Dangerous Liaisons set in 1930s Shanghai.

She has once again played alongside Tony Leung Chiu-wai in Wong Kar-wai's The Grandmaster, a biopic of kung-fu master Yip Man.

Her husband is Chinese rocker Wang Feng, whom she married in 2015.