You may be looking for Godzilla: King of the Monsters!, the 1956 Americanized adaptation of Godzilla. 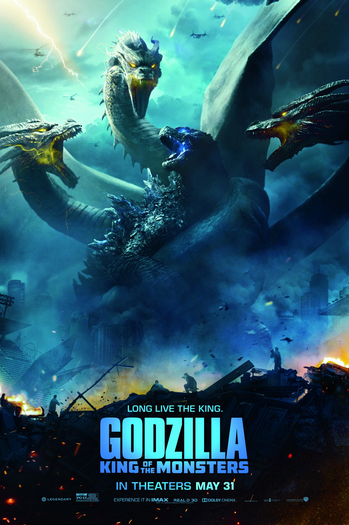 Long live the king.
"Our world is changing. The mass extinction we feared has already begun, and we are the cause. We are the infection. But like all living organisms, the earth unleashed a fever to fight this infection: its original and rightful rulers, the Titans. For thousands of years, these creatures have remained in hiding around the world. And unless all the Titans are found, our planet will perish, and so will we. They are the only guarantee that life will carry on."
— Dr. Emma Russell
Advertisement:

Godzilla: King of the Monsters is a Kaiju Action Adventure film by Legendary Pictures and Warner Bros. It is the sequel to Godzilla (2014) and Kong: Skull Island and is the third film in the MonsterVerse. Written and directed by Michael Dougherty (Trick 'r Treat, Krampus), it is the first American Godzilla film to feature monsters from the original Japanese Toho films besides Godzilla himself (the monsters in question being Mothra, Rodan, and King Ghidorah), and was released on May 31, 2019.

Five years after the San Francisco battle, Monarch is put on trial after the damages caused by Godzilla's battle with the MUTOs, who hasn't appeared since. Meanwhile Emma Russell, haunted by the loss of her son Andrew, develops a machine to communicate with the Titans. However, she is kidnapped along with her daughter, Madison, by eco-terrorist Alan Jonah and takes them to the Monarch base in Antarctica.

Meanwhile, Godzilla immediately senses something is wrong, and goes to Antarctica himself, where he faces his newly awakened nemesis, King Ghidorah.

has been released for the film, detailing the history of Monarch.

Spoilers for Godzilla (2014) will be unmarked

Godzilla: King of the Monsters contains examples of these tropes: