Film / Legend of the Black Scorpion 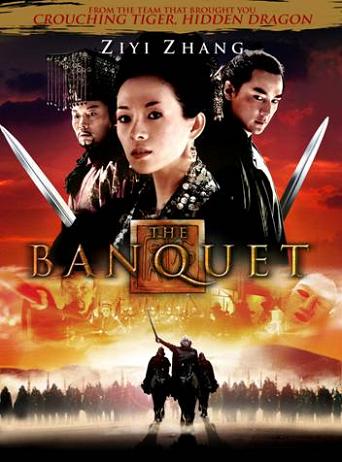 The Banquet, known also by its international release title Legend of the Black Scorpion, is a 2006 wuxia adaptation of Shakespeare's Hamlet, with a few notable changes and twists. Gertrude's expy, the Empress Wan, is rewritten as a much younger and more ambitious woman, who is playing a game of her own as the revenge plot marches on.

In the Five Dynasties and Ten Kingdoms period, Wu Luan is a prince who leaves home to pursue the arts and forget his heartbreak, since his father the Emperor has married Wan, the girl Wu Luan loves. Three years later, his uncle murders his father and takes the throne and the beautiful Wan for himself. Wu Luan returns to court at the summons of the Empress to protect him from assassination attempts, and from here he attempts to learn the truth of his father's death and exact revenge on his uncle, while struggling to come to terms with his feelings for not only his step-mother but also his former betrothed, the devoted Qing.

In the meantime, the new Emperor is completely smitten with Wan and she uses this to her advantage, carving out a place for herself in his court and consolidating her own power. The Empress has a plan, and she is biding her time, waiting to make her move.

Because of the time it was made, the similar setting and themes, and the fact that Gong Li was originally slotted for the role of the Empress, the movie is often compared with Curse of the Golden Flower.