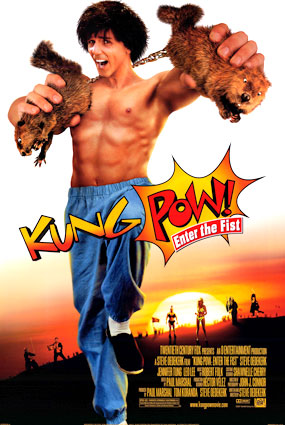 I NEED GOPHER CHUCKS!
"Betty has gone too far. Killing is wrong. And bad. There should be a new, stronger word for killing. Like...badwrong. Or...badong. Yes. Killing is badong. From this moment, I will stand for the opposite of killing: Gnodab."
— The Chosen One
Advertisement:

An evil man kills an entire family to get at a baby that is destined to become the Chosen One. The baby escapes, grows up in the wild, fights off attackers by ripping their clothes into shred-bikinis, joins a school of martial artists who loudly admit that they wear push-up bras, eventually meets the evil man — who, in the intervening years, has changed his name to Betty — and later fights a cow. He is also the Chosen One because his tongue has a face on it; its name is Tonguey.

Oh, and there are French aliens.

A refreshing comedy that's stupid — but amusingly so — Kung Pow! Enter The Fist is a 2002 film written and directed by lead actor Steve Oedekerk. The film uses footage from an obscure Jimmy Wang Yu kung-fu movie from 1976 called Tiger & Crane Fists, along with newly-shot and blue-screened footage (mainly to insert Oedekerk into the film), to create a rather anarchic parody of kung-fu movies in general. Virtually every line is insane — and very quotable; it was difficult choosing which one to put up at the top — and everyone's voice (save Whoa) is dubbed over by Oedekerk himself.

A sequel, Kung Pow 2: Tongue of Fury, was due to follow; it's been in Development Hell for years, though. Word of God states that Oedekerk is (still) trying to find the right Hong Kong movie(s) to lift scenes from.

"We will meet again, Chosen One. Many more times. In the sequel."