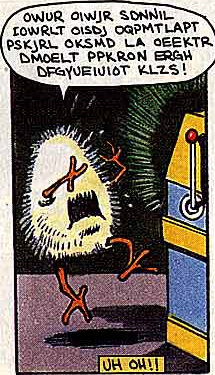 "That is a great deal of meaning to put into such a short name."
— Drazi ambassador (to Tirk, whose name apparently means "Don't touch me, I'm not having another child after this ever again."), Babylon 5: The Legend of the Rangers
Advertisement:

While we commonly expect short phrases in one language to be equally short in another, sometimes short phrases are translated into surprisingly long ones: however, many shows parody this completely by having a single word become a long phrase in English, or a ridiculously long phrase to a single English word, often the word 'Yes'.

This is mild Truth in Television, which is usually due to a language not having a precisely equivalent term for something, so the "translation" is actually more of a definition. An example is Zugzwang

which means "a situation [in a game, especially Chess] where one player is put at a disadvantage because he has to make a move when he would prefer to pass and make no move" (from The Other Wiki).note Technically, the word's literal translation (in German) is simply "compulsion to move". Another example is (translating to Latin) immódica medicamenti stupefactīvi iniéctio or "excessive injection of medicinal chemicals", though you probably call it an "overdose".

Related to Fun with Subtitles, which may overlap with Bilingual Bonus. Also related to Expospeak Gag, with the key difference that in the latter both messages are (technically) in the same language. Compare Name That Unfolds Like Lotus Blossom.

If this is actually happening in the story being presented when a conversation is being held through a translator, it may be because the translator is doing a Tactful Translation and thus editing and carefully rephrasing some of what is being said.

one, to be considered People Sit on Chairs. In keeping with the spirit of the trope, please only add examples that are Egregious or humorous. If your example contains the phrase "roughly equivalent to [short phrase]", it's not an example, nor are proper nouns or technical jargon.
Feedback

The Cone Konchos talk in Pokemon Speak, except for one of them who helps translate. However, the volume dissonance between how much the Konchos say and the meaning that comes from it is puzzling.

The Cone Konchos talk in Pokemon Speak, except for one of them who helps translate. However, the volume dissonance between how much the Konchos say and the meaning that comes from it is puzzling.